courtyard opens with Locus/Lacuna, a new commission by Nour Mobarak.

Inspired by Francis Yates’ book ‘The Art of Memory’, Mobarak tracks the architectural site of a personal memory as an incomplete "memory palace", an ancient mnemonic device, to develop the piece. This device relies on associating information to specific physical environments. The protagonist sets out an imaginary journey over which they visit specific locations – or loci – to recall information. The locus of this memory is the red plush seat. Yet, once entering, there are lacunas- absences in the recording of memory. Each of the tracks of this four-channel sound work underwent distinct processes of degradation and manipulation.

The story recalls a memory when at the age of fifteen, together with her father and brothers, the artist was taken by her father’s aunt to an old movie theatre turned evangelical church. The great aunt, an Evangelist, believed that Satan was responsible for her father’s neurological disease and that he had also entered his children’s bodies. Τhere, an evangelist priest Archange – “this is French for Archangel” – exorcises the family in front of a cheering crowd in what reads like a scene from a film. I say reads because the story is fully accessible only when you read the work’s libretto.

The events took place in Paris in 2001, shortly after the twin towers collapsed. The memory involves an Arab family, a converted Evangelist who invested her finances in the church, and a priest who manipulated people into believing that the world’s end was in sight and that he could save them from evil. A story of manipulation and exploitation worth analysing; one could contextualise it in relation to the history of Evangelism, attitudes towards mental illness, and so on. Yet, the focus here lies not so much on the sequence of events but the imprint of those on the interior psychic space of the story’s protagonist and how she chooses to mediate it through mechanical means.

In making a personal memory public, the recording underwent multiple processes of manipulation and became an exercise in control and letting go for the artist. To record the audio tracks – three of them being her own voice, the fourth a synthesiser melody played by herself – the artist used a 1970s overused reel-to-reel tape recorder. What would have once been a clear analogue sound is now, after 40-some years, distorted. Additionally, each of the tracks underwent processes of (analogue) manipulation and degradation, such as soaking the tape in hydrochloric acid, using different microphones, recording the tracks multiple times, or recording on top of a recording. Emotion is found not through the artist’s narration, who neutrally recalls the story, but through media. Diverse technologies and processes impose themselves on the recording, inevitably shaping its materiality. There is a constant tension between being open to allow something exterior to impose itself on the work and then stopping (and manipulating) the process when the artist wants to. Such an approach is characteristic of Mobarak’s practice, whose interest in giving form to memory and its decay is explored through intersensory equivalents across various media.

It is in the transference from an interior psychic space to an analogue body and then digital environment, the memory exists only in its representation. Mobarak’s intervention in the process of mediation conveys how we constantly manipulate our memories, consciously or unconsciously. Our relation to a particular experience being dependent upon our emotional state when we retrieve it. After all, memories are imprinted on oneself, not only by what happens in reality but also somatically, through feeling and the body.

The material effects of such manipulations are both affecting and affective to the visitor’s experience. Visitors can choose how they want to experience Locus/Lacuna, live mixing the memory as they move across the painting, and continually recomposing it. Similar to the process of excavation, the visitor must piece together the different fragments of the past as they discover them. In doing this, diverse subjectivities, materialities, and temporalities get intertwined, forming new mental images in one’s mind. What was dismantled by the artist gets assembled by the viewer to become something new. 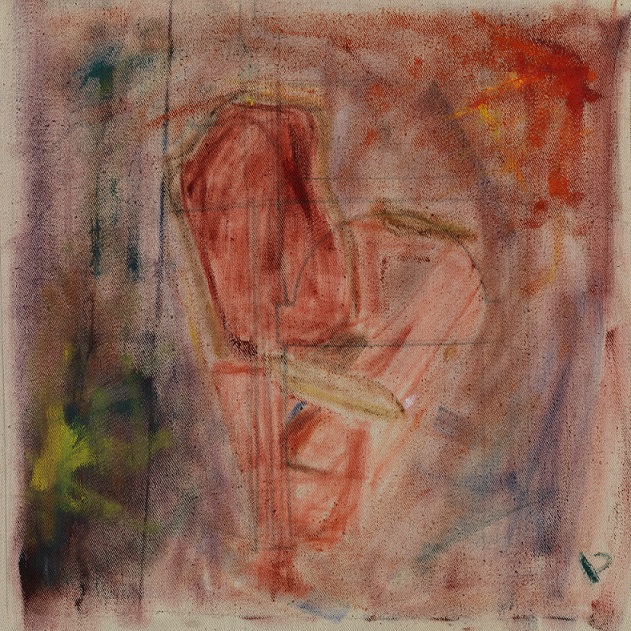