The Breeder is pleased to present Jannis Varelas’ new solo exhibition, Double-Blind, consisting of a new body of work– spanning painting, sculpture, works on paper, video and installation – that expands his distinctive visual language into various new registers and forms. Varelas employs a range of different media and physical scales to register a complex array of scenographies. The exhibition follows the artist’s solo presentation Anima I at the Benaki Museum, Athens and it picks up on threads that have run through his work from the beginning – the agency invested in objects and the domestic space as constructors of narrative and identity, the central place of the body and its psychogeography, a performative process of metamorphoses of the self, the collective subconscious and its repressed desires and impulses. Employing a diverse array of materials, the interwoven elements of these works further the artist’s exploration of a psychosexual and cultural anthropology of the contemporary by means of a newly expressive painterly language.

A good deal of modernist painting since Manet hinged upon some basic oppositions and tensions: between figuration and stylization, depth and flatness, the illusion of pictorial space and the literalness of pigment on a flat surface. By virtue of his birth (1977), the artist Jannis Varelas falls squarely outside of modernism’s trajectory. The art historical citations and playful pastiche of his recent body of work acknowledge that belatedness with an unrelenting irony and exuberance in equal measure. Yet the legacy of Manet persists here nonetheless. The Déjeuner sur L’Herbe echoes not merely in the casual pose of Varelas’ figures, lounging and reclining on their shallow pictorial perch. The landmark painting’s pitched battle between recession and flatness, realism and apparition, resurfaces in Varelas’s canvases as a series of surfaces: at once fastidiously mimetic and brazenly smeared.

At times, the image’s (artificial) depth projects far into the horizon, whether at the seaside or a vista onto some grand building. More often than not, however, they remain confined to some sort of proximate, shallow space. Before their final appearance in and as painted form, each image entails an elaborate process, including props and costumes, studio photo shoots, photo scanning and digitization, and finally projection and tracing. An alchemy of oil, pastel, and gesso coalesce in licked, near-photographic surfaces. Except, that is in those areas (most often his figures’ heads) where the artist expressly renounces the dexterity of his brush. This maneuver calls further attention to another of modernist painting’s emergent problems, namely that of willful de-skilling: the myth – both self-professed and projected – of the artist as a naïf-savant.

The fruits of Varelas’s brush vacillate – cheekily, provocatively, often maddeningly – between the faux-naïf doodle and the licked precision of trompe l’oeil, between ingenuous scribble and overweening verisimilitude. Consider the neatly delineated wrinkles in the stuffed, ersatz flora (or is it fauna?) of The Cave (2021), set against the (no less fake) flowers and stems painted behind them. Or look at the vase of meticulously rendered flowers in Couple (2021) and the gangly hand which they almost eclipse. That the artist is in on the game of such juxtapositions only raises its stakes. At once corpulent and flat, the leaves of the seemingly tropical vegetation in Couple (2021), Under Two Bridges (2021), and The Company (2020) plainly derive from the stylized jungles of Henri “Le Douanier” Rousseau.

Though the early twentieth-century painter claimed to have derived his knowledge of this tropical flora from his time as a soldier in Mexico, it emerged that he had, instead, simply studied various specimens in Paris’s botanical gardens. Rousseau’s paintings breathe less the proverbial call of the wild than hothouse flowers – a fact that Varelas’s paintings take to a higher mathematics of irony (The feline faces stitched into the leopard print blanket in the foreground of The Company (2020) perhaps wink in the same direction). The “jungle” in Under Two Bridges (2021) is revealed to be nothing more than a painted scrim, set before a beach umbrella and cloud-strewn sky. The stalk of a lone plant also rises up behind the screen, however, calling into question the delimitation between artificial jungle and “real” space. The plainly staged nature of these spaces – a residue of their physical and photographic gestation – recalls the prominence of the studio space in the trajectory of painting from Courbet to Picasso and Matisse.

Even the playful masquerade of Varelas’s figures conjure up some familiar modernist gambits, while lending them fresh inflections. A model for the painting Blue Olga (Anima I, 2019) donned an outfit of bright blue paper cut-outs, making the allusion to Matisse unmistakable, but also comical – a literalization at once serious and impish of the marriage of “art and life.” Indeed, the cut-outs are painted with such precision and realism as to far exceed in visual “authenticity” Matisse’s abstract forms. Some of the anonymous individuals in Varelas’ recent works don animal costumes. Yet the majority find their visages disfigured by painterly means. Elongated and flattened, they stare out at us, wide-eyed and alert but resigned to their fate as pure paint. The joy of these paintings is a matched by a melancholy about the power of painting, or about its loss. Yet that proves – despite itself – a compelling gain. 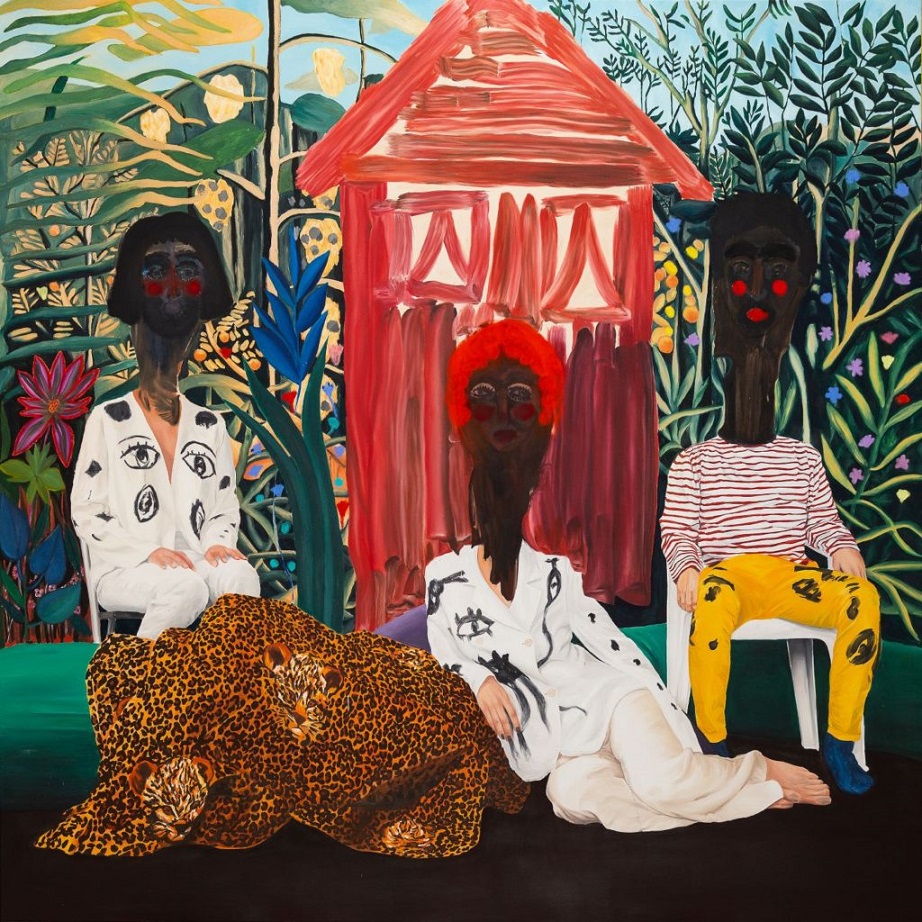