Drawing inspiration from the idea of experimentation as the main element behind creative force and evolution, in combination with the condition of a building that stands as a reborn ruin, the exhibition aims to begin a dialogue between structure and human.  The title of the exhibition is a reference to the ancient Greek verb “peirao” (πειράω-ω, Latin: perior- experiment, experience etc..), which means

to try, to attempt or to experiment/experience. From 1938 to this day, the space that hosts KYAN ATHENS Projects has had several different uses, starting as a family house, turned into a school of foreign languages and later elementary school, it also survived nearly a decade of total abandonment. Eighty-three years later, its prewar salon is revitalized through the presence of ten artists that live and work in Athens.

Through various media the creators touch upon the notions of identity, cultural heritage, individuality, tradition, isolation and alienation within their daily surroundings. In conversation with the building as a symbol of time, artists Venetia Molin, Theodora Kanelli, Claudio Coltorti and Kyvèli Zoi Stenou begin the metaphorical transition from structure to present moment through painting.

Venetia Molin’s piece “Body” (2018) starts the dialogue giving direct importance to the flesh and its ephemerality. “Broken Culture” (2021) by Kyvèli Zoi emphasizes on the human touch that destroys a cultural artifact of the past, while Claudio Coltorti with the work “Apomonosi” (2021) and Theodora Kanelli with “Inside Corner” (2021), focus on a more structural representation of alienation, through the screen of a phone or through an architectural reference.

Evi Kalogiropoulou with her film “Neighbors” (2017) touches upon the idea of experience within the environment of the contemporary city. In a more direct approach, she exposes a hidden part of central Athens through the eyes of the people who live and work in the scrap metal recycling yards of Votanikos area.

In contrast, Theo Prodromidis approaches the idea of abandonment and rebirth through the poetic film “Vox Pop and Nothing More” (2009), which takes place through the eyes of a narrator that revisits the memories of sculptures and structures that once stood decorating the city of Athens.

Anna Yiaxi Savvidou, Angelo Akrida, and Ioannis Augoustis portray the existential aspect of the person within an environment that carries history, through the sculptures: “Bauch” (2020), “9K” (2021) and “Perpetually Half” (2021). Each one of the works, either heavy and still, or airy and light, personifies a version of the human condition. Elena Demetria Chantzis comes to end the conversation with the installation “On the Phone, Doing the Laundry” (2020-21) in which through a diary form of current personal and global events, a series of meditative drawings unfolds as she questions the usage of everyday objects, by giving a new function and narrative to different layers of leftovers. 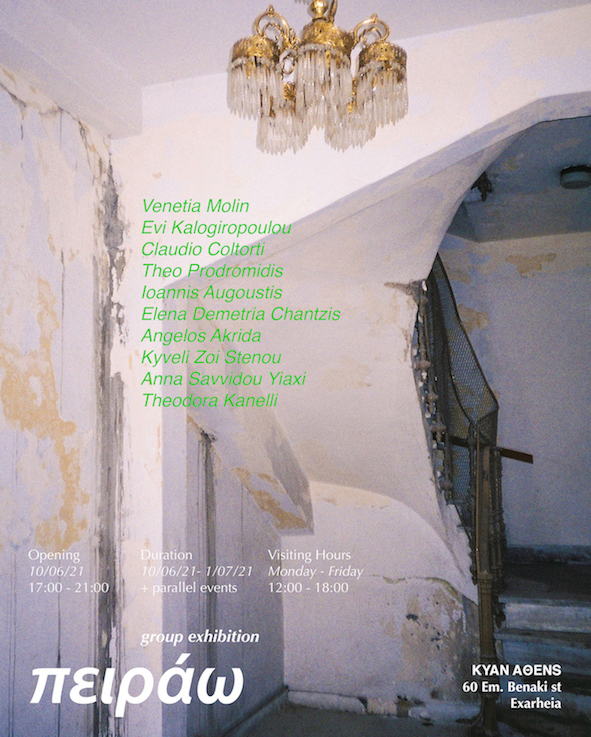