From February until end of May Haus N launched a residency program for Athens based artists, in an effort to activate the space during lockdown and form a dialogue within the local art community. This is a show to celebrate the end of this program and present what our residents worked on during this time.

Irini Miga (b. Greece, lives and works between New York and Athens, Greece) is an interdisciplinary artist working at the intersection of sculpture, installation, video, sound, text and everyday performativity. Miga studied at the Athens School of Fine Arts, London’s Central Saint Martins College, and received her Master in Fine Arts from Columbia University. Recent solo shows include: Reflections, at Atlanta Contemporary; Away in Another Way of Saying Here, at Essex Flowers gallery, in NY; An Interval at Flyweight Projects in NY; and group shows such as Room for Failure at Piero Atchugarry gallery in Miami; Tomorrow’s Dream, at Neuer Essener Kunstverein in Essen; Scraggly Beard Grandpa, at Capsule Shanghai, in China; The Best is the Least We Can Do, at Atlanta Contemporary; The Equilibrists, organized by the New Museum in New York, the DESTE Foundation and shown in the Benaki Museum in Athens. Miga has been honored residencies by several organizations including the Skowhegan School of Painting and Sculpture; Lower Manhattan Cultural Council, Workspace Program; the Drawing Center’s Open Sessions; Bemis Center for Contemporary Art Residency Program; The Fountainhead Residency; and The Watermill Center. Her work belongs to collections such as The European Central Bank Collection, the DESTE Foundation for Contemporary Art / Dakis Joannou Collection, Athens, Greece and other international private collections.

Kostas Sahpazis (born in 1977) lives and works in Athens. He studied Fine Art at the Athens School of Fine Arts in Athens and at the Weißensee Kunsthochschule in Berlin. Recent solo exhibitions include: The Innermost Layer, Bernier Eliades Gallery, Belgium, 2018; Every Rigid Body, Bernier-Eliades-Gallery, Athens, 2016; Old-Eyed Première, Radio Athenes, Athens, 2015; What a Tailor can Do, Statements, Art Basel, Switzerland, 2013; The Gift of Screws, Andreas Melas & Helena Papadopoulos, Athens, 2012. He was the recipient of the Deste Prize in 2013.

Erica Scourti is an artist and writer, born in Athens and now based in London and Athens. Solo shows include Chief Complaint at Almanac, London and Spill Sections at StudioRCA (both 2018), group shows include High Line, New York, Wellcome Collection, Kunsthalle Wien, Hayward Gallery, Munich Kunstverein, EMST Athens and South London Gallery amongst others. Her writing has been published in Spells: 21st Century Occult Poetry (Ignota Press, 2018) and Fiction as Method (2017, Sternberg) and she was guest editor of the journal Happy Hypocrite-Silver Bandage (2019).

Paky Vlassopoulou (b.1985) is an artist who lives and works in Athens, Greece. Her work is informed by the dialectics of traditional sculpture making in relation to spatial issues, object hood, functionality and bodily experiences. From time to time she is concerned with thematics that deal with knowledge production, history, ruins, while in recent years her works revolve around the concepts of proximity, care and hospitality. Selected exhibitions, fellowships and residencies include: International Studio & Curatorial Program (ISCP) New York City, USA; Artworks– Stavros Niarchos Foundation (SNF) Artist Fellowship Program; Phenomenon 3, The Association Phenomenon and the Kerenidis Pepe Collection, Anafi Island, Greece; WHW Akademija, Zagreb, Croatia; The Equilibrists, a project by the New Museum, New York and the DESTE Foundation, Benaki Museum, Athens, Greece; AIR Residency Antwerpen, Antwerp, Belgium,  Reverb: New Art from Greece, School of the Museum of Fine Arts, Boston, USA; A Thousand Doors, commissioned by NEON Foundation and The Whitechapel Gallery, Athens, Greece. In 2012, together with artists Chrysanthi Koumianaki and Kosmas Nikolaou, she co-founded 3 137, an artist run space operating in Athens, Greece. (www.3137.gr) 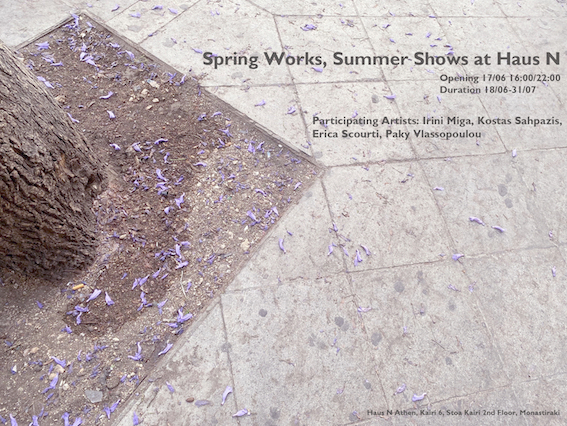