Both Sides Of The Moon

Both Sides Of The Moon

Continuing the multi-level visual research of combining the present and the past, collective and personal memory,  representaion of  the monumental in dialogue with ‘lightness’, the Greek-Egyptian artist Farida El Gazzar highlights the greatness inherent in Kitsch. In her new paintings, Athens stars as the artist’s Alter Ego depicting the architectural and urban landscape as experienced and recorded in the memory of El Gazzar during long walks near her home in Athens. Unable to travel during the lock-down period and looking for elements that would allow her at least a mental journey to her second homeland, Egypt, her paintings are are transformed into portraits of Athens where the East meets the West. At the same time, slightly distorted city-scapes, with vivid colors and almost a dreamy atmoshpere, the works of Farida El Gazzar 'radiograph' the peculiar psycho-emotional state when our neighbourhood became the beginning and end of our empirical world, while they eminate a feeling of nostalgia and euphoria at the same time.

As the artist states:

“During long periods of working online and indoors, the need to ‘move’, to ‘travel’ as well as the need for a connection with nature prevailed even more. Luckily in my neighborhood there is lots of greenery and space for long walks. My sense of space expanded and my feelings of confinement disappeared.

Throughout these past months I would notice the different ranges of greens and its changes, under its different light and season. The days grew longer and the night shorter. The light switched on near a window just before night would arrive is the magic hour that I love. This transition and settling of all of a day’s thoughts collectively coming into one calmer state of being.

The roads are empty and the light is sharp. I pay attention to the architecture of the homes and gardens I walk by in this green suburb, and it feels like a rediscovery of a place so familiar over the years

I enjoy the depiction of kitsch and random elements noticed from the constructions as they stand so charmingly in their existence. In the paintings my lines are off and slightly distorted, creating a feeling of a naïve and childlike place as seen in a dream.

A dream state of mind where thoughts become more vivid and clear, there is always a hopeful euphoria at the end of each walk.” 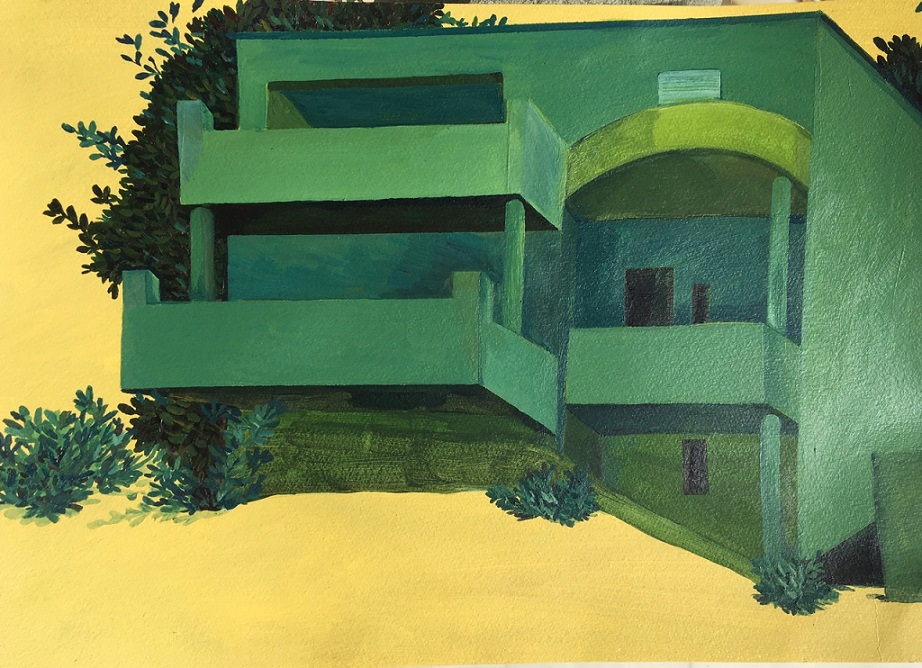