Independence is the main thematic core of the open hybrid programme of actions and expanded visual media (performance, performative lectures, discussions, interactive arts), which operates in two parallel axes entitled Soma Independent and Spirit Independent, to be implemented in the year 2021-22 at the space 'ΥΛΗ[matter]HYLE. The programme is curated by the new team of collaborators of 'ΥΛΗ[matter]HYLE; Lydia Antoniou, George Bekirakis, Alegia Papageorgiou, Stefania Stouri, Monika Szczukowska and Agapi Harmani.

'ΥΛΗ[matter]HYLE is a semi-public / semi-private space in the centre of Athens that brings together art, politics and science with practices of unpretentious co-construction. Within this goal, Independence, a program that invites curators, artists, scientists, theorists and activists to participate in artistic actions and debates around the theme of Independence, also operates. Through the (semi)public nature of the 'ΥΛΗ[matter]HYLE art-studio, the two routes Soma Independent and Spirit Independent, are organically shaped through research and dialogue, and aim to strengthen research and artistic practices and develop an extended circle of friends/viewers, without exclusion and discrimination. The notions of dialogue, collaboration, ecology, feminism are elaborated through the programme and become the foundations to build the experiment and effort of the project. The interactions between research and practice create the relationships of dependence or independence. The relations of dependence between them highlights the need for independence from social differences, oppressions, prejudices, fears, and any limitations to expression and co-creation.

Soma Independent axis draws its characteristics from the artistic practices that work with the artist's own body, using the body as a carrier and medium of memory of history and social trauma. The structure of this axis emphasizes on performance works that negotiate the representation of the body, education and collaboration, and artistic feminist practices. The programme is structured through hospitality, exchange and public discussions, with the aim of an open dialogue and collaboration between artists, students and audiences from different generations, experiences, and social contexts. The Soma Independent axis includes the project Performative Encounters, a research curatorial workshop by Lydia Antoniou and George Bekirakis with a duration of six months, which comprises of: (1) the public presentation of the performances "Dichotomy" and "Sjimon Says" by the invited young artists Elissavet Sfyri and Despina Charitonidi. (2) The second part unfolds with the two artists introducing questions in the form of a lively dialogue with contemporary artists in order to re-examine their works through the critical gaze of the group. The artists and curators hosted by 'ΥΛΗ[matter]HYLE, aspire to create a dynamic community through the durational workshop around performance art. In the current socio-political context they contemplate on the role of women, and how by utilising the specific medium of expression, performance art, one can challenge stereotypical models of oppression or change epistemological problematics around gender. At the same time, during the whole process, an archival record of the encounters and discussions is kept in the form of a performative diary, through writing, video, sound and photography. The aim of the two curators' research is to construct contemporary protocols of collaboration in artistic production through dialogue, cooperation and education. The works of the performance artists in 'ΥΛΗ[matter]HYLE space will trigger a public discussion around the material and immaterial nature of the works, the contents and themes they address, the questions raised by the works, and issues related to the medium of performance itself. The research will observe and record methodologies of implementing dialogue between the artists and the transformation of the works of Elissavet Sfyri and Despina Charitonidi through these encounters. (3) The result of this research will be the emergence and presentation of the new works of performances that will emerge and be presented at the end of the workshop. Throughout the workshop, the research material will be made public on the electronic platforms of 'ΥΛΗ[matter]HYLE. We also expect that this research will ensure the continuation of this particular method of curation in the future with the collaboration of 'ΥΛΗ[matter]HYLE with other artists and organisations.

Performative Encounters will commence on 14 October 2021, from 8-10PM where the public presentation of the performances "Dichotomy" and "Sjimon Says" will take place.

Elissavet Sfyri participates with her work Dichotomy, which she initially presented for the first time in 2018 at the Centre D'Art Contemporain Geneva and subsequent iterations in different venues in London.  The starting point of the work is the Greek habit of smashing plates or glasses during celebrations. In 1969, the dictator Papadopoulos banned this practice. Therefore, the celebratory-joyful act became an act of process and resistance. The political situation of the time was also reflected in the music. Rembetiko, a music that fascinated Greece from the beginning of the 20th century to the early 1950s, was a kind of blues, usually dealing with themes of exile, loss of family, wandering the streets in the dark, abuse, unrequited love, imprisonment and death. The music and the forbidden custom of breaking dishes captured the longing for something that no longer exists, which may lie in the longing for the motherland, family, love or the past. Through this piece she is confronted with the turbulent history of Greece as well as her personal nostalgia for the country she grew up in. After the economic crisis and political problems, the Greece of today is different from the country she recalls from her childhood and this longing corresponds to her experience of immigration.

Despina Charitonidi participates with the performance Sjimen Says, which she first performed at Studio Volante in Rome. In Sijmen Says the artist deals with the theme of "building", exploring the concept of construction in all its meanings, examining the possibilities implied by "foundation" and the inevitable consequences it entails. It uses brick, the symbol of construction par excellence, as a tool. Sijmen Says for Despina is a work in which the individual builds a pedestal for herself while trying to balance on it. Each time a brick is added, the pedestal becomes higher and more unstable. For her, through different approaches to performance art, she explores concepts such as effort, ambition, physicality, perseverance, and ultimately the fall as a foundation. While her research is developed in the studio, her performativity unfolds from relatively intimate spaces in the public sphere. Her sculptural background contributes to her understanding of space and the production of different environments. The fundamental characteristic of her work lies in the study of the properties of different materials and the traits they evoke in the viewer. In her performances, the basic idea starts from the human act, where the presence of the artist challenges the audience in an intense and interactive way. Since physical communication almost effortlessly and immediately provides a shared understanding, most of her interpretations treat the body as a tool of limited possibilities, uncontrollable fragility and imitation through repetition. 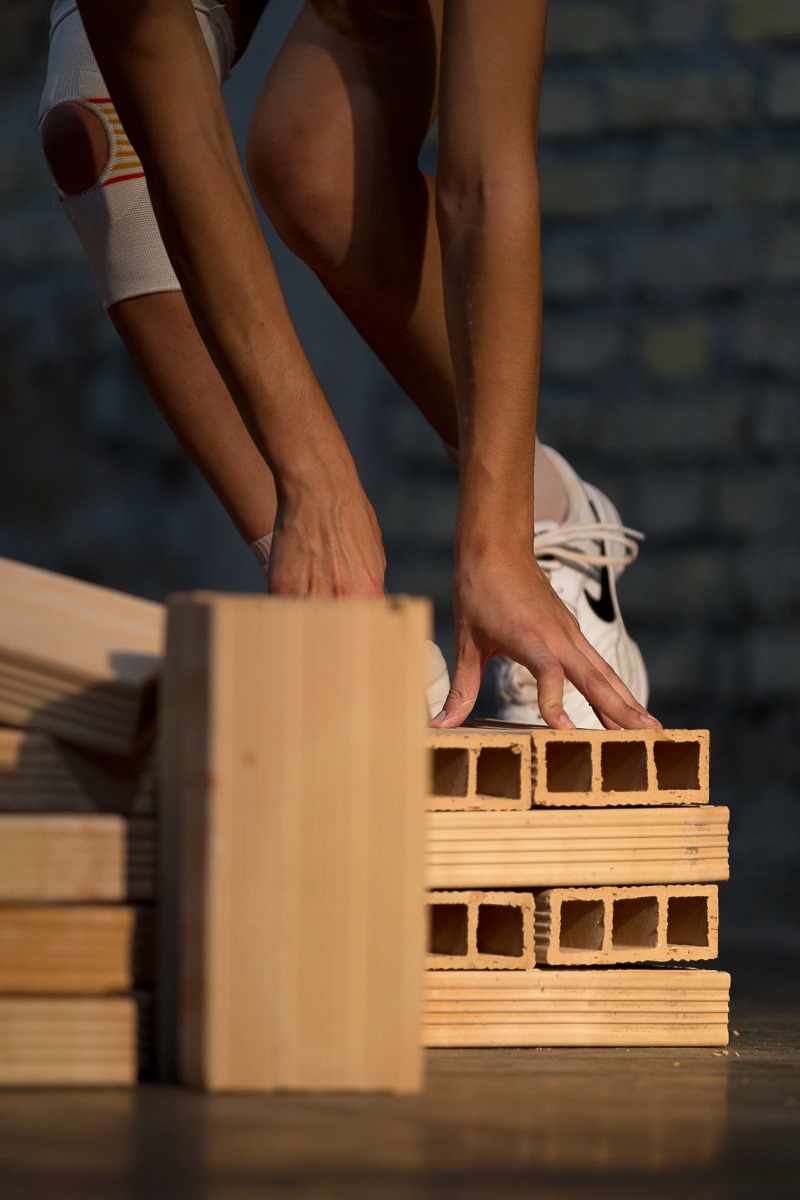