Sometimes going to the grocery store makes me feel less alone. Sometimes I'm trying to tell someone about this new opening in my life, and I end up feeling closed. When I say opening, I mean the possibility that when Ι feel I won't feel like I shouldn't feel. My body in a room with other bodies feeling me feeling my body. When I say this room I mean you. When I say you I mean make room. On a good day, I write in sentences. On a bad day I write in thoughts. You know when you're dreaming, and past and present blend together in a way that makes it feel like maybe you can imagine a future? And then you wake up. Dreaming is not quite escape, not quite thinking, not quite feeling, or is it? Because sometimes I feel so much more hopeful when I'm asleep, like this day when everything changes, I mean once I wake up, or maybe I'm already awake, but not quite, because it's that possibility of living in two times or experiences at once, but in the same body, the one that lets me down as soon as I get out of bed.

The way in brings together new and existing works by Leah Clements, Christian Friedrich, Aaron Ratajczyk and Iris Touliatou. Video, sound and sculptural installations respond to the architecture of Haus N, proposing an existential exploration of being.

The starting point of this exhibition stems from the recent past - a time when our collective experience of time itself felt different, when the relationships between ourselves and our bodies, our surroundings and others were renegotiated, and when the exploration of interiority, embodied presence, and the desire to connect felt like shared concerns.

We have been working closely with each of the invited artists to develop a scenography that welcomes the viewer into an interior space of memory, feeling and desire. The presented installations make public and palpable elements that are highly intimate and intangible. It is through a specific organisation of space and time that the works move between introversion and entanglement, to convey a sense of containment and opening up.  The way in "shifts with the emotion, with the feeling or not feeling, a vibration."

About the artist contributions:

The continuous tension between (interior) self and (exterior) world, between notions of control and subjugation, between pleasure and pain, finds a cerebral/bodily address in Christian Friedrich's silent film Untitled, 2010-2011. Alternating shots of freedom and overpowering – a man being repeatedly electroshocked in a sex dungeon, a billowing American flag, a NYC Thanksgiving Day Parade – rhythmically re-appear at a pace too high to grasp, causing images to appear superimposed and the video to become structural rather than discursive. This can be said about most of Friedrich's work, as well as about the exhibition in general; the focus lies on the artistic rather than the referential impact, on what the work does and how it comes into being rather than what it is about, though without shying away from its references.

Leah Clements explores altered experiences of space and time through a light and sound sequence titled Reprise/Reprieve. The work has grown out of Clements' text-based video installation in her solo exhibition The Siren of the Deep at Eastside Projects earlier this year, which is centred around the phenomenon of deep-sea divers feeling an overwhelming pull to stay on the bottom of the ocean in a state of awe and never come back up. This new work – developed through a more experiential and somatic approach –uses deep bass sound, warm lights and an installation reminiscent of an abandoned medical experiment, in a sequence that causes a gradual build up and sudden release of tension at set intervals in the gallery.

Presence and its mediation, isolation and connection, intimacy and belonging are explored in Aaron Ratajczyk's contribution. His installation consists of a tent-like structure made of semi-transparent plastic, entitled Home Ressemblances, and a floor made of flattened cardboard boxes connected to speakers through contact mics, entitled Remote Ressemblances. Found on the streets of Athens and at local convenience stores these materials served as packaging of products from around the world. Viewers are invited to enter Ratajczyk's open yet contained environment, generating sounds through which togetherness becomes both intimate and alienating.

Iris Touliatou's contribution What we had expected and for how long is a new work developed through a relational exchange between herself and the curators of the exhibition. As a result Haus N is punctuated with objects, including Touliatou's 2016 piece Exhausted Lovers, a carefully contained breakup, which the curators carried away from the artist's home. While being abroad the artist entrusted us with the keys to her house/studio, to extract items of our choosing. The items are containers – drawers, shelves, trays, frames – each holding together very personal and at times useful materials. Through the act of making public, the negotiations and the relational exchange between us, the work engages proximity and public intimacy, agency and co-dependence, togetherness and solitude, optimism and letting go.

Leah Clements' (b. 1989, based in London) practice spans film, photography, performance, writing, installation, and other media. Her work is concerned with the relationship between the psychological, emotional, and physical, often through personal accounts of unusual or hard-to-articulate experiences. Her practice also focuses on sickness/cripness/disability in art, in critical and practical ways. Clements is currently artist in residence at Serpentine Galleries and has previously been artist in residence at Wysing Arts Centre and Rupert. She has presented her work at Chisenhale Gallery, Somerset House Studios, Science Gallery, Institute of Contemporary Art, Jupiter Woods and Wellcome Collection, London; Baltic39, Newcastle; Vermilion Sands, Copenhagen; The National Gallery of Art, Vilnius; Eastside Projects, Birmingham; La Casa Encendida, Madrid. www.leahclements.com

Ιris Touliatou (b. 1981, based in Athens) engages in a conceptual practice, which transposes the political, environmental and affective, and employs various mediums necessary for each intervention. Manifesting in sculpture, photography, sound, scent and text, her work creates open forms and shared experiences, to comment on time, intimacy, transience, mortality, economies and states of being. Ιris Touliatou has exhibited work at 2021 New Museum Triennial, New York; Palais de Tokyo, Paris; The 7th Athens Biennale, DESTE Foundation for Contemporary Art and Radio Athènes, Athens, among others. www.iristouliatou.com

Christian Friedrich (1977, based in Amsterdam and Berlin) investigates the condition, structure and manipulation of subject-object relationships through a variety of media, including video, sculpture, audio and scent. His work frequently employs elements of the sexually outré, played against formalism, aestheticism, and structural contradiction. Friedrich's work has been shown, among others, at KW Institute for Contemporary Art, PS120, Berlin; Cabinet Gallery, London; NYU, New York; Cobra Museum of Modern Art, Amstelveen; Grazer Kunstverein, Graz; De Hallen, Haarlem; Goethe-Institut, De Appel, Stedelijk Museum, Amsterdam; Städtische Galerie am ZKM, Karlsruhe. In 2017, Friedrich was the recipient of the Cobra Art Prize, in 2013 he was nominated for Prix de Rome.

Aaron Ratajczyk's (1989, based in London and Berlin) practice explores modes of intimacy and dis-identification, treating the body as a malleable interface. Often expressed through non-verbal affects – mood, atmosphere and poetics – his work takes the form of video, performance, text and installation. His work has been presented at Museum of Modern Art and KEM, Warsaw; Tree Art Museum, Beijing; RCA CCA in partnership with Nottingham Contemporary; Yvonne Lambert, Berlin; Forum for Live Art Amsterdam. Forthcoming projects include group exhibitions at Goldsmiths CCA and South London Gallery (as part of New Contemporaries) and a solo commission by Institute of Contemporary Art, London. www.aaronratajczyk.com

The way in is curated by Panos Fourtoulakis and Titus Nouwens

Access: The space is up two flights of stairs and is not wheelchair accessible. Leah Clements is making a film version of her work for anyone unable to access the space, which will be available online asap and shared on haus-n.com. For other access info at the show itself contact [email protected] 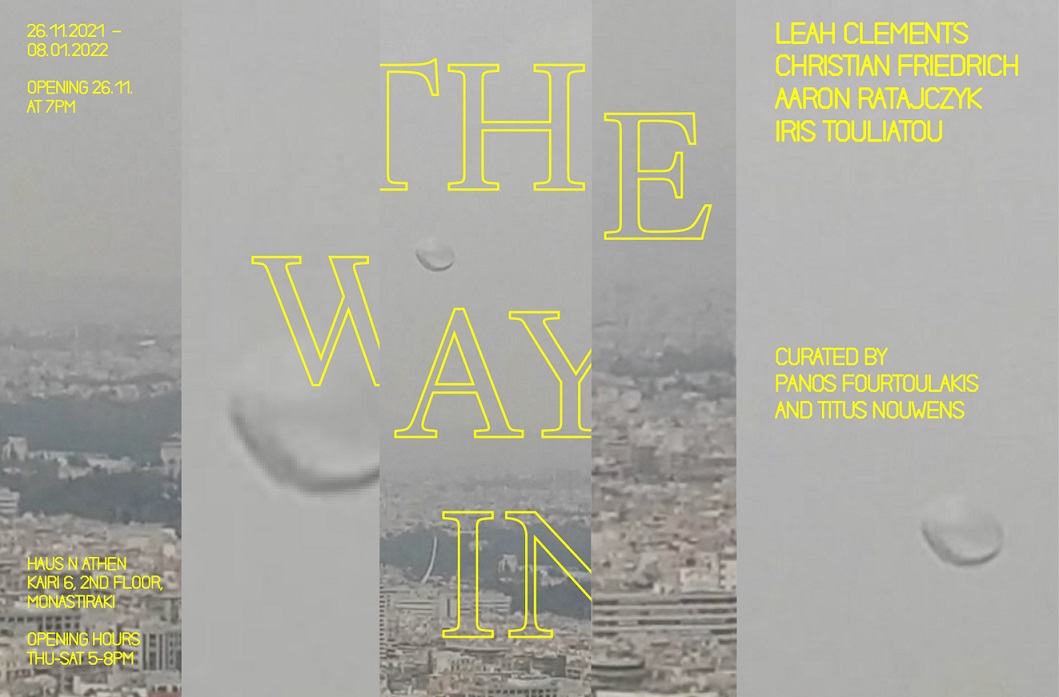