The B. & M. Theocharakis Foundation honours the acclaimed surrealist painter Nikos Engonopoulos, 37 years after his death, by presenting a retrospective of his oeuvre in 2022.

Nikos Engonopoulos studied at the Athens School of Fine Arts under professors Konstantinos Parthenis, Dimitrios Biskinis, Thomas Thomopoulos, and Yiannis Kefallinos. Thanks to his apprenticeship, after his graduation in 1938, under Fotis Kontoglou and professor Alexandros Xyngopoulos, he was exposed to the tradition and the spirit of the Byzantine and post-Byzantine art. In 1967 he was appointed professor of painting at the School of Architecture, National Technical University of Athens. Sotiris Sorogas, his close collaborator and successor at the School of Architecture, National Technical University of Athens, writes: “His subject matter was far from the theocratic point of view portrayed in icons, which was considered in itself a huge aberration. Thus the faces in Engonopoulos’ paintings do not bear the element of the divine. Instead, they are Dionysian or Apollonian heroes, often depicting the artist himself in a cryptical manner, in a dreamy atmosphere, extravagantly tragic. His paintings narrate myths, historical facts or everyday life incidents, in which unconventional time, the paradox of the forms, and the pending symbolization transform them into places of allure and mystery. It is here that his references to Greek mythology lie.”

His world is a universe of painting with imaginary heroes from mythology and literature, history and poetry, with references to Hermes, Io, Hercules, Eurydice, Orpheus, Odysseus, Calypso, Thetis and Peleus, Jason, Medea, or even to Anthemius of Tralles and Isidore of Miletus. An unexpected world, uniting the past with the present, showcasing the power of the surrealist expression through painting, using pure colours and strong drawing skills. As Errieti Engonopoulou points out, her father believed that “with art we can face the incoherence of life. Art can alleviate our life, our journey towards death.” In 1958, he received the Greek Ministry of Education’s First Prize for Poetry, and George I’s Gold Cross in 1966. 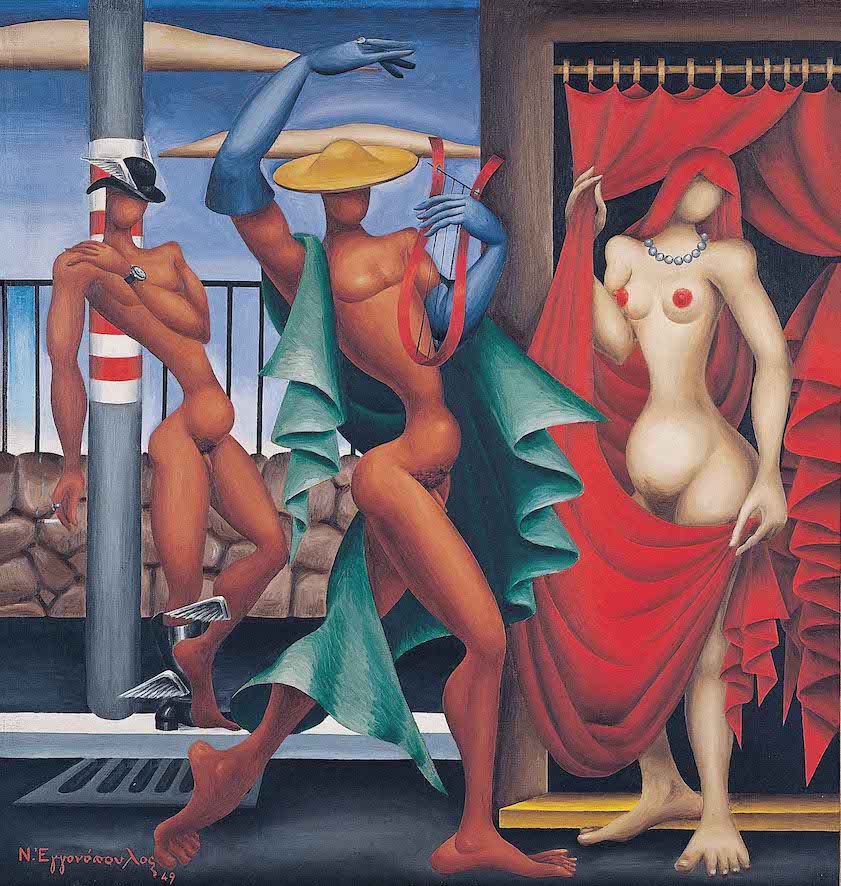