Fragments of Time Past

Fragments of Time Past

Vera Lutter Returns to Athens with Fragments of Time Past, An Exhibition of Classical Subjects Opening April 7, 2022

There’s just such overwhelming beauty and majesty and scale in Athens. I was always marveling at what moved the people of that time to build these structures.

Gagosian is pleased to announce Fragments of Time Past, an exhibition of new work by Vera Lutter featuring photographs of Attica’s ancient architecture, together with her images of the Greek temples of Paestum, Italy, and of classical statues housed in New York’s Metropolitan Museum of Art. Opening on April 7, 2022, this is Lutter’s first solo exhibition in Athens in more than fifteen years.

In response to an editorial commission—her first—from the New York Times Magazine, Lutter visited the Acropolis and Plato’s Academy in Athens, and the Temple of Poseidon in Cape Sounio in August 2021, braving the extreme heat and wildfires that threatened Greece that summer. Given the lengthy exposure times of her photographs, individuals passing through the sites have left no visible traces in the images, while the blurring of windswept trees contrasts with the unchanging solidity of the architecture. Employing the durational aspects of her medium—as opposed to the theoretical instantaneity of “the decisive moment”—and eschewing darkroom manipulation or digital alteration, Lutter engages with the fundamentals of photography. The scale, physicality, and temporality of her process create images that transform these ancient subjects, revealing their beauty in unprecedented, strikingly contemporary ways.

To make her works, Lutter shoots with lensless pinhole cameras that she constructs with darkened chambers that range from steamer trunks to shipping containers and empty rooms. Hanging photosensitive paper on their back walls, she uses long exposure times that extend from hours to months. The resulting images are unique: direct imprints of her subjects’ luminous traces that are tonally reversed negatives, with impossibly dark skies and the shadowy recesses of buildings transformed into brilliant whites. Lutter’s fascination with time has led her to locations ranging from contemporary cityscapes to ancient sites. Her images are meditations on the history of human creativity and the endurance of built structures.

When producing photographs of Paestum’s Doric temples in 2015, Lutter used a large shipping container as her camera, making expansive images in keeping with the scale of the monumental architecture. The images of classical temples are complemented by photographs of Greek and Roman sculpture in the Metropolitan Museum of Art (2012–13) that picture individual statues and collections of smaller works in a vitrine, capturing both the antique fragments and the surrounding exhibition spaces. These works relate to those featured in Lutter’s most recent institutional exhibition, Museum in the Camera at the Los Angeles County Museum of Art (2021), which featured large-scale photographs she made of its architecture, galleries, and collections during her two-year residency there.

Fragments of Time Past will be accompanied by a book presenting the works featured in the exhibition, with an essay by Jean Dykstra. 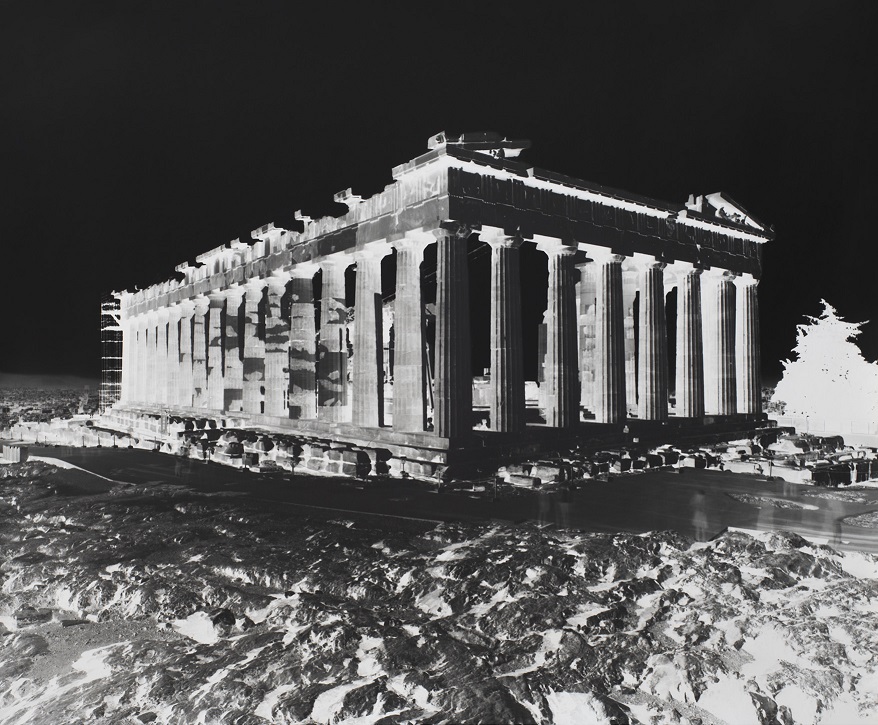