Paradoxical e-Traditions
A group exhibition curated by Georgia Liapi.
Opening: April 12, 2022, at 17:00. Exhibition Duration: April 12 - May 25, 2022. “A cyborg world might be about lived social and bodily realities in which people are not afraid of their joint kinship with animals and machines, not afraid of permanently partial identities and contradictory standpoints.” Donna Haraway, A Cyborg Manifesto (1985) “All possibilities lay before us. We no longer have to choose. We are encouraged to take on the totality of being.” Dean Lockwood, Rob Coley -Cloud Time: The Inception of the Future (2012) “Traditions which appear or claim to be old are often quite recent in origin and sometimes invented” Eric Hobsbawm, “The Invention of Tradition” (1992) At the dusk of 20th Century, Donna Haraway introduced “A Cyborg Manifesto” essay in an effort “to build an ironic political myth, faithful to feminism, socialism and materialism” using her words. In order to speak about the capitalist technocratic politics, and the possibilities of socialist feminism engagement with science and technology, Haraway, marks the hybrid organism of a cyborg - one of the highest technological achievements of this time- as a historical signifier of the changing conditions that women are experiencing in the late 20th Century but most importantly, anticipate for in the coming Century. "Paradoxical e-Traditions" draws on the same ironic attitude, as a project that takes as its starting point topics raised in Haraway’s essay, through the lens of the current sociocultural conditions -whilst in the third decade of the 21st Century. Revisiting the essay at a time where social connection and integration is interwoven with emerging technologies, structuring historical transformations, the invited artists disentangle the paradox of living in a culture of ‘capitalist digitality’; “A culture, defined by the global informatic archive to which we are constantly tethered, fosters a dream-like state in which we can both possess and be everything we wish simultaneously” (as mentioned at ‘Cloud Time’ by Dean Lockwood & Rob Coley). The project gathers work and performances that evoke the evolution of the postmodern human relation with the machine, emerging computational technology and its connection with what is classically understood us cultural temporal tradition within societies. Challenging the emotional resistance of societies to cancel binaries or accept innovation that questions what is perceived as inherent tradition -depending to one's region and social life, the participating artists employ different mediums and techniques, with the use of -what is usually understood as- “traditional” practices like embroidery and drawing, as art forms adjusted to a contemporary context of art production and dissemination. Involving those with new media technology such as early and contemporary computer graphics, they highlight the challenges of adapting to the ever-changing needs of today's societies. A recurring twist between digital and physical, past and future as a reflection of present time. Considering the idea of ​​the cyborg world where "people are not afraid of their common kinship with animals and machines, they are not afraid of permanently identities and conflicting views" the project attempts to examine the social perception of gender identities, the representation of feminine bodies in art history, the gender dimension of artificial intelligence, and ecologies of the future as potentially developing (“invented”) traditions. A tailored public programme of performances and film screenings is to be announced. Participating artists: Georgia Fambris, Kyriaki Goni, Maïa Izzo-Foulquier, Marina Karella, Erica Scourti, Nicolas Sassoon, Evann Siebens, Theo Triantafyllidis, Marina Velisioti, Iria Vrettou
Curated by:Georgia Liapi
Special thanks to The Breeder Gallery, and Zoumboulakis Galleries in Athens, and Wil Aballe Art Projects in Vancouver BC, for the collaboration. 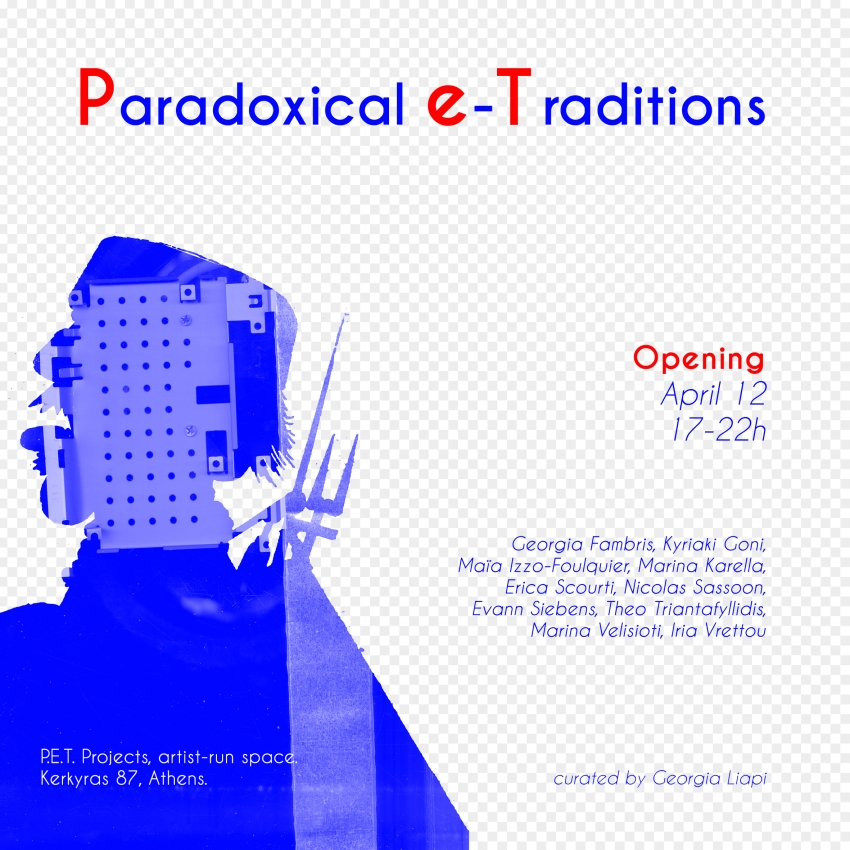