The Seed, a new exhibition by Panos Tsagaris, consists of paintings, works on paper and sculptural elements created from spring 2020 onwards. Tsagaris never shies away from his era’s upheavals, whether it is the Greek government’s debt crisis, police brutality against Afro-Americans or 9/11. Consequently, when the Covid-19 epidemic hit New York hard - the state where he lives and works - Tsagaris was deeply concerned. The title of the exhibition, The Seed, reflects how he feels about this unprecedented situation. The seed is a universal symbol of cyclical time, fertility, growth, birth and rebirth, originating from sacred geometry and The Tree of Life. The seed is the principle of life and, by association, of this exhibition.

First and foremost, Panos Tsagaris is interested in the world beyond physical appearance. He skillfully fuses eastern and western theologies, as well as mystical and metaphysical elements with theories and diagrams from scientific books.  As a modern alchemist, he wants to ground these beliefs in science - especially quantum physics - in order to experience the divine consciously. During his time in Los Angeles, Tsagaris, always on a spiritual quest, became more exposed to the work of the Theosophical Society - a spiritual movement combining mysticism with metaphysics - and the work of the painter Agnes Pelton, among others, who also live in the vastness of California. This was not something completely new for Tsagaris who has a long and consistent practice working with the invisible forces of life, from his first performative experimentations sharing his self-healing practices to his distinct abstract paintings, often representing the axes of life and everything around it. Nevertheless, it was a period of consolidation, a moment where all the seeds came together.

Furthermore, the mirror, a highly symbolic object, is a core element to his practice. Tsagaris is determined to push its physical and allegorical limits through a unique palimpsestic process as described below: He creates an installation with mirrors. The highly reflective composition is photographed using his iPhone, a contemporary mirror, meant to reinforce vanity and individualism. The photo is then printed out on a large black and white xerox print, symbolizing western fundamental dualistic structures. Then, more mirrors are added on top and the new installation is photographed again. The process is repeated continuously until the reflective qualities of the mirror are completely lost. Finally, he makes silkscreens of some of those photos onto canvas and applies layers of acrylics and ink by hand, before selected details are highlighted with gold leaf, a symbol of divinity in most spiritual tradition.

​​Mirrors are often used to describe our perception of reality and can function as barriers between the conscious and unconscious. So, this technique enables the artist to ‘exhaust’ the mirrors, symbolically eliminating the platonic ‘idols’ to show that the universe is not made of images but of energy. In these works, the human body with its distinct contour is always omnipresent. It is, after all, a vessel we have in our disposition to experience the world through our sensations, and forms our phenomenological experience. Nevertheless, as Tsagaris perceives the world as an uninterrupted ocean of energy, the body can do more: it can be a receptor of cosmic forces.

Moreover, Tsagaris’ works on paper extend the idea of the body as a cosmic vessel of energy, an incubator of life, and focus on the power of the myth, a traditional story with ostensibly historical events presenting a worldview and the archetypes, universal symbols and patterns reflecting the collective unconscious we find in myths across cultures. For example, Osiris, god of the underground world in Egyptian mythology is present in these works along with Lilith, Cyclopes and memento mori. Osiris didn’t only protect the dead but also taught agriculture. His sarcophagus is an organic reference to rebirth, reflecting the continuity of time. Note that the myth is inseparable from the ritual. This is where myth meets Tsagaris. He integrates the archetypes and ultimately bridges the fabric of myth with the fabric of space-time.

Lastly, it is important to discuss in more detail the significance of the time framework these works are conceived in: from the beginning of intense lockdowns in spring 2020 to summer 2022, with a large part of the population having received two or more vaccine shots by the time the exhibition is taking place. Covid-19 is seen as a potent catalyst for transformation and a shift from a 3-dimensional consciousness bound to duality and separation, under which we operate in our everyday life, to a 5-dimensional one, a higher energetic experience and alignment with cosmic forces. During this shift, it is quite common that people to experience a degree of isolation. Some people have tried to fill the gap with instant gratification purchases from commercial giants. These outdated ways stemming from an extremely materialistic and individualistic system, have proved insufficient. We felt alone even when we were hyperconnected through numerous social media and communication apps.

All in all, Tsagaris' works attempt to illustrate the question of the political significance of the 5th dimension as the most ethical way to sustain life. This dimension represents a state of pure love, oneness, a radical alignment with life forces, a mothering beyond human lives. Conflicts, sickness, poverty and misery have no place in this dimension. Tsagaris approaches the 5th dimension through his painting practice and invites us to embrace it as we yearn for some sense after a challenging period of introspection and revision of our lifestyles. 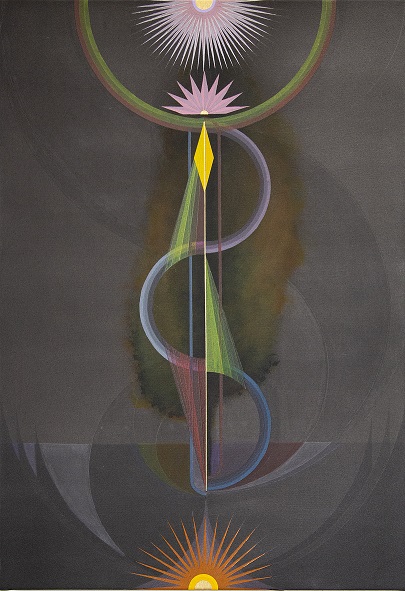