Antonis Pittas has long been researching the visual language and legacy of modernism and its promise for a better, more egalitarian and democratic world for all. However, the urge for total renewal also contributed to total destruction. In 2019 Pittas was an artist in residence at the Van Doesburg House, the former home and studio of Theo van Doesburg, just outside of Paris. His residency coincided with the widespread yellow vest protests in France. Although the demonstrations seemed visually united by the yellow vests, the protestors’ motivations for change were extremely diverse. Pittas moved from the urgency of the protests outside on the streets to the historical context and the private sphere of the Van Doesburg House. It brought him to investigate the legacy of modernism through a political lens. Pittas based his project on a selection of Van Doesburg works on paper from the extensive holdings of the Centraal Museum, in Utrecht, where Van Doesburg was born and raised. As the driving force behind De Stijl, he became an influential artist in modern European art history. Pittas selected drawings and gouaches by Van Doesburg, which he juxtaposes and brings into dialogue with his own large, scale aluminum cutouts of silhouettes. Pittas captured the demonstrations of the yellow vests by photographing the protesters, the police and their interactions on the streets. They return as silhouettes in this intervention, sometimes as distinct individuals, sometimes merging into a mass of bodies. Placed in front of Van Doesburg’s drawings, they seem to both block and protect his work, his legacy. The visitors of the exhibition are encouraged to photograph the work with the use of flash, activating the installation.
Both the exhibition and the publication which accompanies it are characterized by reflective yellow foil, which is a material generally used for traffic barriers and road signs. It evokes associations with danger, visibility, warning, protection, toxicity, safety, and control. The title jaune, geel, gelb, yellow is borrowed from Van Doesburg’s Dadaist magazine Mécano, which has been published 100 years ago. The exhibition and the publication examine the failure, collapse and historicisation of the modernist ideals espoused by Theo van Doesburg, set against the current political backdrop of mass protest.

Pittas’ installation is a direct intervention in the EMΣΤ collection, specifically in a chapter which refers to political turmoil and protest in the 1960s and 1970s, when the country was in the grips of a military dictatorship, prompting a consideration of different aspects of political discontent and its means of expression. This exhibition is part of a new programme in EMΣΤ invites contemporary artists to intervene in the museum’s collection. It is the first time the work of Theo van Doesburg is presented in Greece. 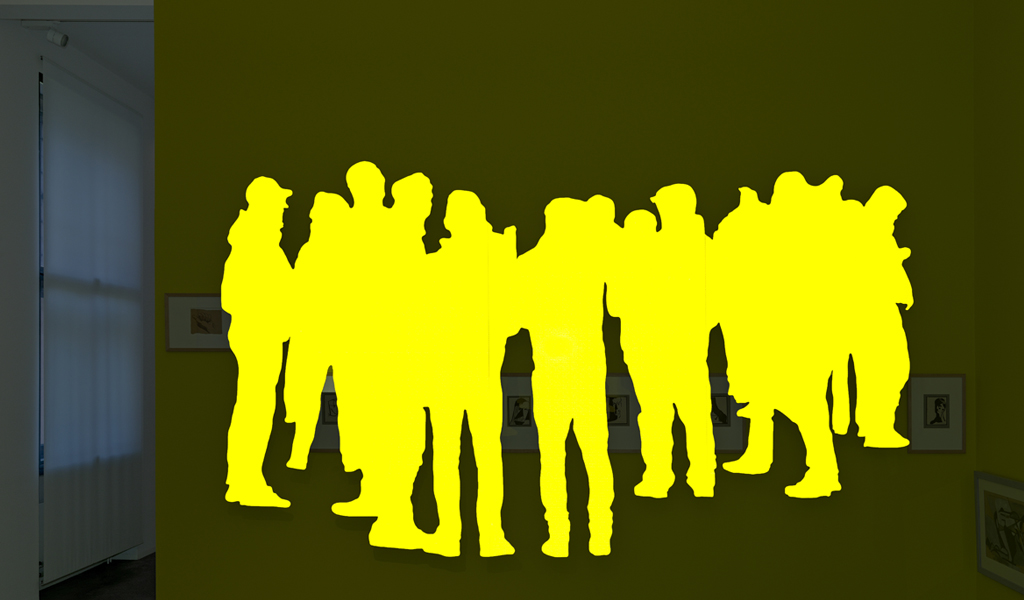