Mr. Kyriakos Tsiflakos, a well-known art collector writes about her:

I was lucky enough to know the paintings of Mantalina Psoma long before I met her personally. It was back in 2007, when my gaze was captivated by two of her works that participated in the exhibition entitled "In the Present Time - New Greek Artists", which was organized by the National Museum of Contemporary Art, then housed in the space of the Athens Concert Hall. Since then, I have included her in the list of contemporary Greek artists, whose work I follow systematically and with intense interest. [...]

Through her work, Mantalina Psoma has managed to form her own distinctively personal anthropocentric painting style, which hovers between figurativeness and expressionism.

In her current exhibition, the artist attempts a discreet transition towards new thematic formulations. At the same time, however, it keeps unchanged her basic technical approaches, as well as her narrative intentions. In these works, the average age of her "heroines" seems to have increased somewhat compared to before, while the field of action of said heroines now seems to be dense vegetation and forest.

Could this be a hint of the painter's own "coming of age"?

Do forests embody some invisible threats or protection from unknown impending dangers?

And does any human presence in the forest imply some sort of escape, a quest, or the sought-after redemption?

Don't expect answers from the painter. The painter believes that she has fulfilled her mission, by making the viewer think, empathize and be moved... The only thing that is certain is that Mantalina Psoma's paintings remain as enchanting, emotionally charged and captivating as the first time I stood in front of her works. 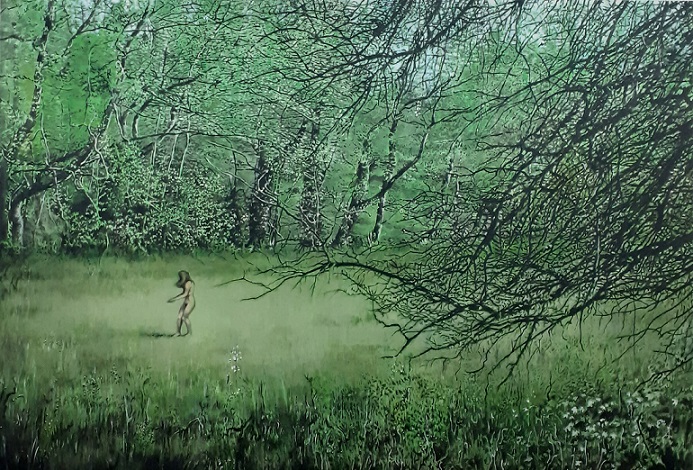