In his fourth solo exhibition, Odysseas Annitsakis ventures into a dialogue between printmaking and poetry, towards an ongoing exploration and experimentation around form and his themes. The exhibition unravels through three conceptual areas. The first, under the title Floats, features colored prints using a variety of different printmaking techniques, as well as employing experimentation of forms and shapes. Serving as an introduction to the conceptual sections that follow, Floats explore adventure and wandering through a nostalgic spectrum.

The second section, entitled Art Book-Summer Sonata features six etchings in dialogue with six poems, also all printed by etching. This series of works, produced by the artist in the summer of 2022, focuses on existential quests and concerns tightly related to the topics of mortality and decay. The third section Dark Room explores more obscure and introspective aspects of wandering. Just like descending to the basement of a house, so the works of this series explore unexpected and unpredictable encounters, fear and memory. Marianthi Pappa notes: “The basement of the house, a dungeon of fears and secrets or unexpected forgotten treasures? It takes courage for children to enter the dusty basement, but they may find the challenge rewarding...Stashed trunks of memory, holding both fear and excitement, a 'tingle' on the back for what has never been said”

Odysseas Annitsakis is a visual artist and printmaker born in Athens in 1965. Owing to his father's work, he spent his childhood between the outskirts of Gramos, Ioannina and the alleys of Athens. His youth was marked by months of travelling in Latin America, Africa, Asia and Europe until he discovered the art of printmaking in Oldenburg, Germany. He lived and worked there until 1998 when he returned to Greece. His artistic practice mainly focuses on printmaking but also painting, sculpture, installation, music and most recently poetry. He is a member of the Greek Chamber of Fine Arts and a member of the Greek Printmakers' Association. He has participated in numerous group exhibitions and has presented three solo exhibitions. His works are included in public and private collections. Find out more about his work at www.anoart.gr . 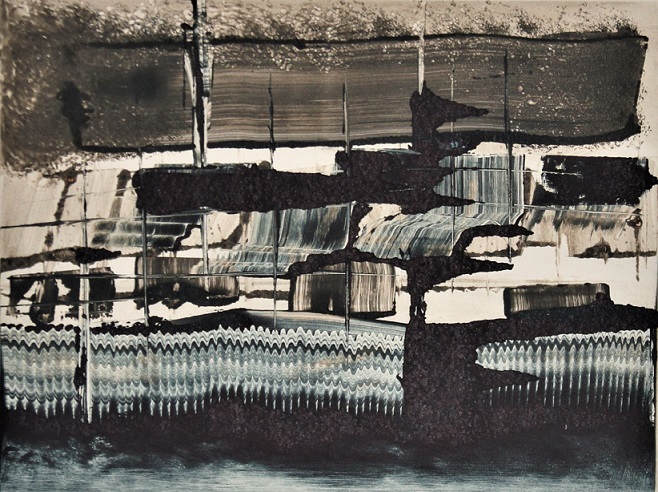